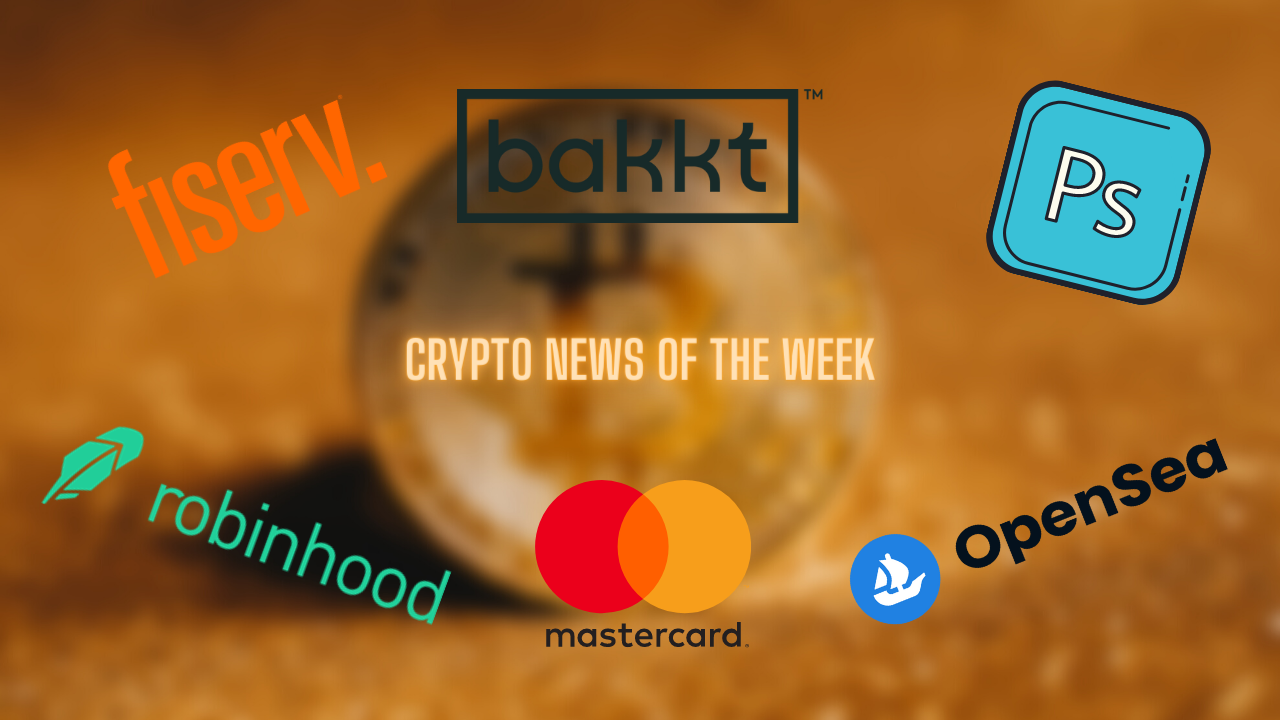 The week in the crypto world had some remarkable feats. From Bakkt app sales surging tremendously to countries like Israel planning their pilot program for CBDCs, the crypto community saw several developments across the globe. What more happened this week? Let’s talk about this in this week’s crypto round-up.

He’ll launch these artworks at New York City’s Bright Moments gallery from 9th December to 13th December. Due to his popularity, Hobbs’ fans contributed 1,800 ETH (amounting to more than $7 million) in exchange for 50 of these tokens.

Attaining those tokens will grant its holder ownership rights to the artworks minted during the event. Each of the tokens features a number between one and 50, corresponding to a specific artwork from the collection.

Twitter CEO has shared his view and warned about major disruption in the Global Economy.

Twitter and Square CEO Jack Dorsey tweeted his views and warned about the upcoming hyperinflation in the U.S. and the rest of the world. Hyperinflation is a term economists use to describe a period of extremely high inflation, which measures the rate of rising prices for goods and services.

Dorsey’s tweet comes as consumer’s price inflation is at its highest level in 30 years. In fact, he has stated, “Hyperinflation is going to change everything.” and “It’s happening.”

Recently, the U.S. economy has been badly impacted by a supply chain crisis, which has seen consumers spending more money and stocking up on a great number of products. This is why the businesses are struggling to meet the demand. In fact, a backlog of shipping at ports across the U.S. has resulted in the supply chain struggling to keep its head above the water.

Israel is planning to start the pilot program for its CBDC.

Bank of Israel released a working paper on a central bank digital currency (CBDC) intended as a basis for discussion and feedback. Moreover, the bank emphasized it has not yet decided to launch a digital shekel but is creating an action plan to be prepared if the benefits start to outweigh the risks.

The Bank has also asked for public comments on the matter back in July. Also, it has established a panel led by its deputy governor to study its feasibility & whether a digital shekel would benefit the economy.

Benefits of a digital shekel include reducing the use of cash in the fight against the “shadow economy”, creating an efficient and cheaper infrastructure for cross-border payments, allowing for using a digital form of payment that is private, and ensuring a backup for the payments system in case of an emergency breakdown.

Full Story: Israel next in line to pilot CBDC

The United States has recently taken over China, becoming the country with the largest percentage of the total hash rate pointed at the BTC network.

Previously, China has held the number one spot in the race for the hashing rate. However, China’s recent crackdown on digital currencies has left the country affray.

According to the Cambridge Centre for Alternative Finance’s BTC mining map, beginning in June of 2021, the United States overtook Mainland China, with the majority of the hash power supporting the BTC network.

Many businesses find the U.S. an attractive location to have an office due to the country’s political stability. Previously, it was expected that most miners leaving China would set up shop in an interim location where there are low electricity prices and the infrastructure needed to run a digital currency mining operation business. However, people directly shifted their operations to the United States.

Full Story: The US overtakes China in the race of digital hash power

Bakkt sales grew over 180% after partnerships with Mastercard, Fiserv.

After announcing its partnership with Google, Bakkt announced its partnerships with payment giant Mastercard and Fiserv. Following that, Bakkt shares jumped about 180%, reaching a record high of $28.

The company had announced that they’re working to allow buying/selling digital assets through custodial wallets. Moreover, this partnership will enable Mastercard to offer loyalty rewards through cryptocurrency payments. In fact, this move brings the universe of cryptocurrency one step closer to bridging the gap with the traditional credit card payment industry.

Bakkt-Mastercard tie-up is a continuation of the payment giant’s recent aggressiveness in the crypto sector. Also, its partnership with Fiserv will allow Bakkt to interact with Fiserv’s Carat omnichannel ecosystem to pursue new B2B and B2C payouts options. Moreover, it’ll also enable loyalty programs and transactions, all with crypto assets available via a digital asset wallet.

Adobe will verify NFT creations on marketplaces thorugh metadata in the future.

Software giant Adobe announced it would allow verification of NFT creations. Adobe announced that it would partner with major NFT marketplaces such as OpenSea, and SuperRare to verify NFTs.

Adobe’s Content Credentials can add an NFT creator’s wallet address to the metadata of tokens. NFT creators can remain pseudonymous. In fact, they can choose to display crypto addresses linked to their online identity or social media profiles.

Also, Rarible an another NFT marketplace will offer Adobe’s digital verification system, which will help “fight misinformation with attribution and verifiable truth of content.”

Robinhood shares slumped after a drop in crypto revenue in this quarter.

Shares of Robinhood (HOOD) fell sharply due to the lower-than-expected crypto trading revenue. This is after the company’s strong growth in the past quarters.

The popular trading firm posted its third-quarter report stating that crypto accounted for 19% ($51 million) of the total $267 million worth of transaction-based revenue. Moreover, the report coincided with its share HOOD falling with degrowth of 10%.

In fact, the $51 million generated from crypto revenue is substantially lower than the record $233 million Robinhood had in Q2. A major part of that revenue is due to the DOGE community, which represented a big 62% of the crypto revenue.

Overall, the firm posted total net revenue of $365 million for this quarter, in line with the Wall Street analysts’ predictions of net revenues at $437.1 million.

President of El Salvador, Nayib Bukele bought the Bitcoin dip adding 420 Bitcoins worth $25 million to the Treasury. Moreover, he has taken advantage of today’s drop in Bitcoin prices to increase his country’s BTC reserves.

The President noted that they have been making a profit from the Bitcoins they have purchased. In fact, this is the first big purchase of El Salvador in more than one month after its last purchase on September 20, last month.

As per the official data, the El Salvador treasury holds a total of 1,120 BTC worth nearly $66 million. The company’s economy heavily depends on the $6 billion in remittances received from abroad. So, getting Bitcoin as the official currency will help to cut down on remittance costs.

Earlier last month, El Salvador became the first country in the world to adopt bitcoin as legal tender alongside the U.S. dollar.

India to introduce cryptocurrency regulation in the next year’s February budget.

The Indian government is reportedly planning to introduce cryptocurrency regulation by the next general Budget, which is in February next year. According to reports, instead of banning cryptocurrencies, like bitcoin, the government is likely to regulate crypto assets as commodities.

The government is likely to regulate cryptocurrencies as an asset class, similar to how commodities are regulated. This is along with appropriate taxation on transactions and gains. In June, the government reportedly said that the Securities and Exchange Board of India (SEBI) will oversee regulations for the cryptocurrency sector after crypto is classified as an asset class.

India does not currently regulate the crypto sector. Officials from the Finance Ministry and the Reserve Bank of India (RBI) are fine-tuning the regulatory framework for crypto. However, the central bank recently said it still has “serious concerns” about cryptocurrency.

Central Retail Corp., the retail giant of Thailand, has released a pilot program for its crypto token ‘C-Coin’. The company wants to use this private crypto token as a replacement in fiat payments at all its outlets.

Currently, the retail giant has ascertained its target at the employees in the firm. However, it will soon expand this offering to the customers as well.

As of now, all the 80,000 employees worldwide are distributing the following crypto token amongst themselves in Thailand.

Moreover, the corporation is focusing on ensuring smooth operations in the pilot program. This is so that they can learn more about the adoption and functioning of the token. This is also further to expand utility to its customer with positive results.

An Islamic group in Indonesia ..