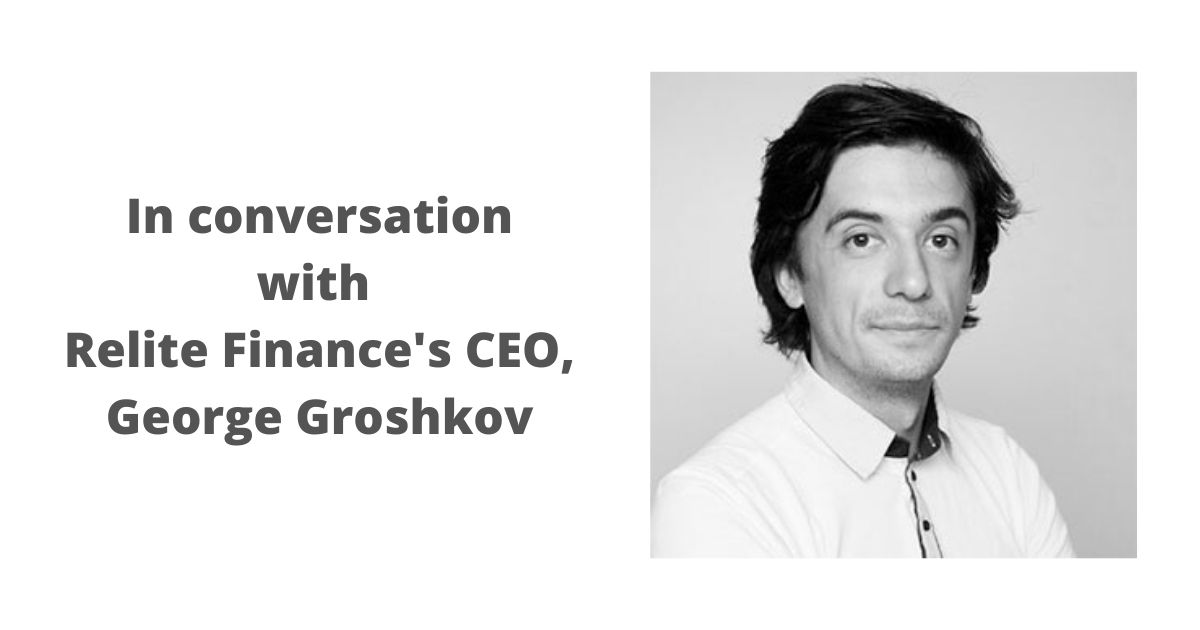 One of the key areas that cryptocurrencies and blockchain are said to impact is the financing industry. Also known as DeFi (decentralized finance), we’re seeing several approaches to doing the same. One such project that recently caught our attention is Relite Finance, which dubs itself as a cross-chain lending protocol. While the idea of lending isn’t new, the project aims to differentiate itself by offering interoperability between Bitcoin and ERC-20 assets along with promising lower collateral and fees. We caught up with Relite Finance’s CEO George Groshkov on the gap they’re trying to solve, the project’s status, and its future. Do note that the interview has been slightly edited for clarity.

I believe, it came gradually. I was in an environment that there was not much innovation happening (or very slow). I was attracted first to Bitcoin (2013) mostly because of the Cypherpunk kind of mindset – challenging the establishment i.e. governments and institutions.

It’s only after I started, I realised that crypto is a disruptive industry where you meet the most crazy, yet talented people. Further on, I started working with Blockchain startups, and now I’m full-time into crypto.

TK: It seems you were not happy with current lending platforms available in the market as your first move in the crypto segment was in an already crowded lending space? What makes Relite Finance stand out?

We want to bring simplicity and sustainability to the market. We offer lower fees, and better collateral terms by utilizing a unique pool structure. The other aspect is that we will offer a variety of asset pools in the Polkadot ecosystem: DOT, KSM, ACALA. We believe that native assets have to be used (no wrappers) so in the future users can connect their Ledgers, and use assets on multiple chains. That will empower true cross-chain lending using Polkadot.

And one more thing – we plan to also open NFT collateral.

TK: How would you solve the classic marketplace issue of supply and demand? What if there are lenders, but less borrowers, or vice versa?

That’s a question about liquidity and incentivization. This will come with a good liquidity rewards mechanism – 25% of RELI tokens will be distributed both to lenders and borrowers. In addition to that, they earn a portion of the revenue if they stake RELI in our Reserve Fund pool. This will bring them additional revenue and ensure protocol stability. Finally, LPs can utilize our Uniswap RELI-ETH pairs. The “stickiness” comes of course, with better APY and reasonable interest rates to attract both sides of the market. Our variety of pools will ensure that users are willing to “stick” for the long run.

TK: Does the concept of ‘Reserve Fund’ act like an insurance cover or a “stabilizing aspect” in case of any unfortunate mishap in the platform?

Basically, we can consider the “Reserve fund” a safety cushion, during sharp declines in the market. In order not to liquidate all the collateral immediately we use parts of the fund to recapitalize users’ positions. After that, the released RELI are being acquired to keep the pool in good balance and to stabilize the RELI price. The “Reserve Fund” itself also works as a mechanism to give better and stable rates to users. So, we can place it in both aspects – as an “insurance” but also a “stabilizer”.

Essentially, the fixed term pools have stable APY throughout the whole lending cycle. In the future, users will be also able to set a timeframe of these loans. You can relate here to “loan maturity” or borrowing from a Bank for 5 years for example in the FIAT system. The fixed terms work with a different pool utilisation and are derived from the “fixed income fund” understandings.

6. Do you have any specific timelines for integrating Polkadot bridges?

Firstly, the Parachain slot auction in Polkadot has to be completed (June). Already then, we can start testing the MVP pool implementation. Of course, development takes time (both from Polkadot side and ours), so schedule is tentative. But as Polkadot and parachains start to roll out, the bridges will be ready too. And we already tested a bridge between Kusama and Kovan. So, we’re prepared.

TK: What type of security system have you deployed to guard the platform against breaches as in the last couple of months there seems to be an increase in the number of attacks on DeFi platforms?

We have an experienced dev team with advisors from the Estonian cybersecurity department. They actually are also working on NATO cybersecurity shield based in Estonia. So, I can see we have a good eye on “breaches”. On top of that we plan to conduct several audits. The first one is already scheduled with Certik to check our main contracts.

We’ve seen a lot of attacks lately indeed, that’s we will conduct extensive testing before release. On top of that we will also offer an attractive bounty programme.

TK: What other pools you have in mind other than Uniswap for RELITE token?

We will have multiple pools in Relite. Starting from stable coins – DAI, USDC to ETH, YFI and in the future DOT and KSM.

As for the trading pools, we will have RELI-ETH and then eventually RELI-DOT on cross-chain DEX’s.

TK: How much decrease in transaction costs is expected by using Polkadot parachains?

Our initial analyses show that costs can go lower (~90%) lower than ETH.  As for the speed, we see possibilities of up-to-to 1000 TPS.

TK: On what factors, do you think RELI token’s value would increase in the future?

This is up to the market to decide. But considering that we’re in a bull market, we expect a very high increase.