Top 10 Crypto Acquisitions Of All time 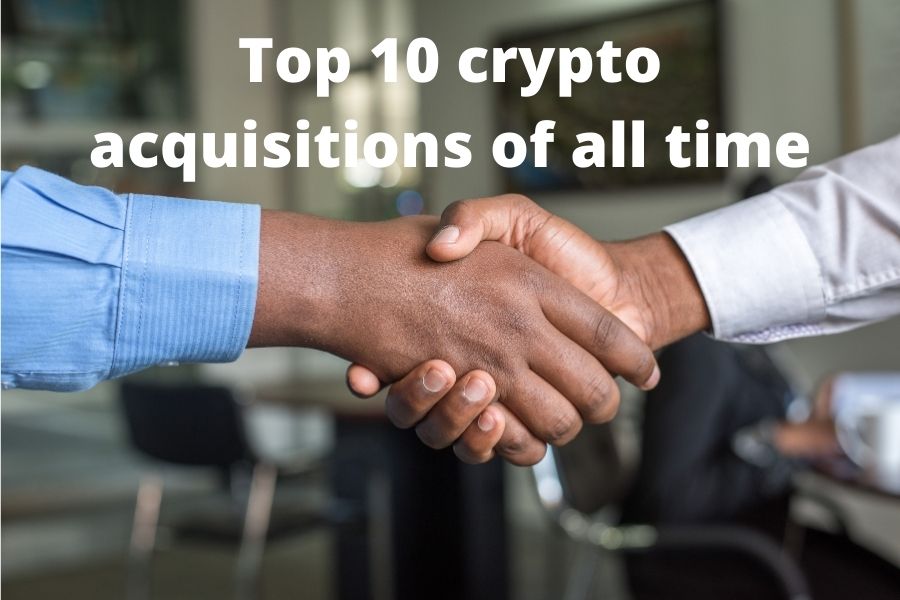 With over $1.1 billion in mergers and acquisitions in 2020, double of what was in 2019, the world of crypto had witnessed a significant uptick in getting millions of dollars of payouts. And these activities have been carried out by companies of all sizes, be it crypto exchanges or virtual currencies themselves (with TRON leading the way). This piece walks you through 10 such crypto acquisitions of all time; let’s get started.

Yes, we are talking of Binance acquiring CoinMarketCap in March 2020. Said to be the organization’s most significant acquisition move, the speculations around the same suggest that the leading exchange struck a deal worth $400 million in shares and BNB (Binance’s virtual currency)

However, as per sources, Binance has no immediate plans for the data aggregator and plans to run it as an independent platform.

In early 2018 when the payment start-up Circle closed an acquisition deal with Polenix (a U.S-based cryptocurrency exchange) for a similar amount as the deal above. While the crypto community was supposed to have no idea of the acquisition, rumors started spreading a few weeks before the official announcement on February 26th, 2018.

The acquisition was focused on improving the reliability and scalability of operations over the platform. Lastly, with Circle’s plan to push the development of Poloniex, the platform experienced a lot of visionary upgrades before being sold off to a group of Asian investors in October 2019.

The third known acquisition on our list also comes at a price worth $400 million. This deal took place between Bitstamp (Europe’s leading cryptocurrency exchanges) and the Belgian private investment and equity firm, NXMH. Realized in October 2018, the acquisition deal was said to be worked out already in December 2017.

Interestingly, the deal also received responses from four other interested buyers from Asia and China. However, NXMH appealed to be an excellent deal for Bitstamp as it had already been the owner of a Korbit, a famous crypto exchange based out of Korea.

Coinbase has been one of the most prominent players in the crypto space. Among its numerous acquisitions, the cryptocurrency exchange purchased Earn.com on April 2018. Earn.com is a US-based startup that allows senders to use cryptocurrency for their payments and reply to emails to get the tasks completed.

While Coinbase decided to stay mum on the acquisition cost, the deal is expected to be over $300 million in its worth. Although Coinbase had shown active interest in the product offering by Earn.com, the critical player of crypto decided to shut down their acquired platform to focus on Coinbase’s variation of the same, called the Coinbase Earn.

July 2018 was the period that witnessed one of the most significant acquisitions held by an ICO-funded digital currency to date. The crypto market’s largest player and one of the early movers into the space, BitTorrent, decided to sell its decentralized computing architecture to store and distribute data for $125 million in cash.

The purchase was made by Justin Sun’s blockchain startup ‘TRON.’ Later, both the TRON and BitTorrent teams merged to operate as one single identity.

One of the most excellent in-cash acquisitions was around September 2018. Lightyear Corp., one of the leading crypto names behind the ‘Stellar’ blockchain, purchased Chain Inc., a popular blockchain start-up from San Francisco. The deal that is expected to be valued at around $350 million, though the exact terms have not been disclosed.

Post the acquisition; these two companies came together to form a new firm called Interstellar. This newly merged platform was intended to migrate the products and customer base from Chain onto the global public ledger by Stellar. This way, the platform aimed to create a solution that would enable organizations to exchange, issue, and manage assets.

Dated February 2019, the exchange services provider of cryptocurrency, Kraken, officially acquired the trading startup Crypto Facilities that deals with regulated futures. While the deal was said to be held at an undisclosed valuation, reports peg it to be around at least $100 million.

The acquisition was aimed at enabling customers from Kraken to trade spots and open the possibility of open positions. This way, the platform was offering exposure to future movements and prices, and is dubbed as Kraken Futures.

One of the latest players in the crypto space, the crypto exchange FTX was launched in 2019. Interestingly, post a year of its launch, the company conducted an acquisition of nine-figure in 2020. The deal was signed off between FTX and the portfolio management app, Blockfolio. With the deal price for the acquisition being $150 million, the company continues to function as an individual app, post its deal.

The purchase of Blockfolio was expected to bring the platform’s 6 million users to the FTX exchange.

With the most significant number of acquisitions under its forte, the United States-based crypto exchange, Coinbase is a company with over 16 deals in its decade-long history. The acquisition of the prime brokerage platform Tagomi seems to be making it stronger.

Valued at $90 million, the reason behind Tagomi’s sale was low revenues. The company failed to generate decent revenue, post its trading fees were slashed. Thanks to the acquisition, Coinbase is now using its services for its institutional trading business dubbed Coinbase Prime.

Coinbase’s third acquisition present in our list; this marks the end of the top 10 crypto acquisitions of all time. This deal helped the exchange acquire the cryptocurrency wallet and custody service provider, Xapo.

The deal was marked at $55 million. It’s expected to boost Coinbase’s revenue by giving it a flexible platform for allowing users to trade in crypto without worrying about their safe custody.