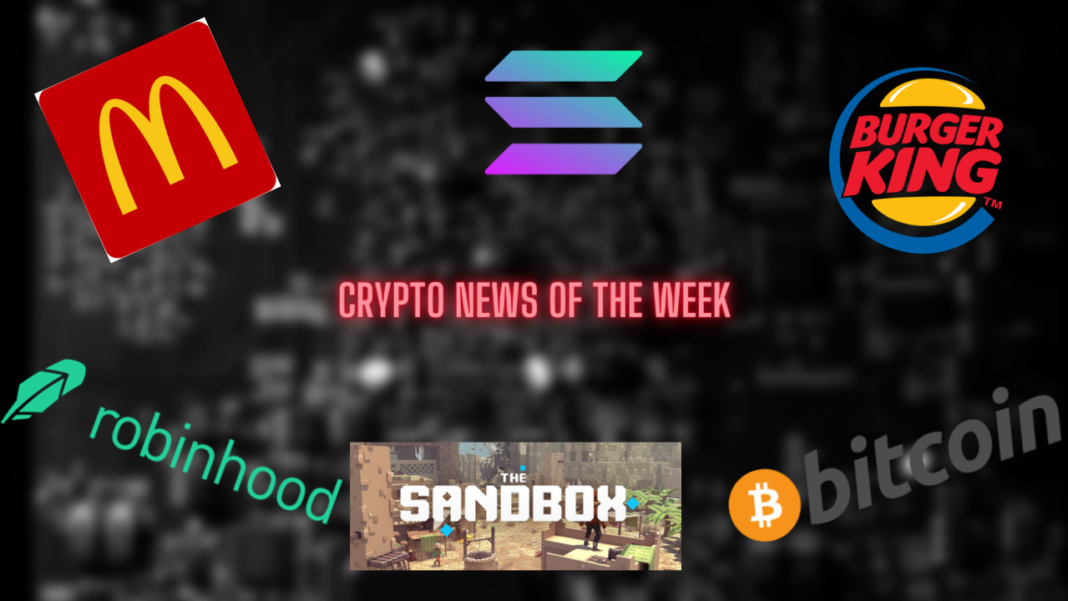 This week, we had a record low of Bitcoin supply in crypto exchanges, surpassing all records in three years. On the other hand, A new crypto-based online casino has started offering Solana as a medium for online gaming. What else happened this week? Let’s talk about it in this week’s crypto roundup.

Crypto Exchanges had the lowest supply of Bitcoin, breaking its record of three years.

Data from various markets show that the Bitcoin exchange low balance was last seen in late 2018. Moreover, Bitcoin balances went low when the market was on the cusp of a good run. However, balances tend to rise when the market sees an increased sell-off period. This is because investors load up their bitcoin on exchanges.

Numerous models in the past have predicted some high valuations by the end of 2021. There is no way of being sure, but general indicators like bitcoin on exchanges suggest that the market could be in a reasonable growth period.

Elon Musk had tweeted that his imaginary university will accept DOGE as payment for tuition fees. Soon after that, the market cap of Dogecoin added $3 billion.

Musk has been in the news a lot about pumping or dumping the crypto markets with just his tweets, which some take as jokes and some don’t. Recently, Musk sent Twitter users into a frenzy after revealing his plan to start a university. He named it “Texas Institute of Technology & Science.”

It remains unclear whether Musk’s tweet was anything more than a tasteless gag. However, the Dogecoin community is already saving up for tuition. Also, all this debacle has raised questions on Musk’s reason to support DOGE, questioning whether he expects genuine growth.

First of its kind Crypto Casino to offer Solana as a payment medium.

Cryptocurrency-based Online Casino becomes the first-ever in the gambling industry to offer Solana as a medium of online gambling.

As a matter of fact, CryptoGames has earned the trust of thousands globally through the consistent offering of impenetrable digital security, reliability, and user efficiency. So, to take their service to the next level, they’ve announced their game-changing update at the casino.

CryptoGames has recently revealed Solana as their newest cryptocurrency that users can use to play Dice and other games. Moreover, Users can use Solana to make deposits, withdrawals, and place bets.

CryptoGames offers a total of 9 casino games, including Dice, on their website. Moreover, Solana can be used to play them all. And it has been fully enabled for flexible transactions of funds at any time. The minimum deposit for each transaction of Solana is 0.001 Solana.

According to the job posting, they’ve hired a financial services expert to work with global financial institutions and innovative fintech. The company would like the new employee to “transform the way they transact digital assets, stablecoins, security-backed tokens, asset-backed tokens, and NFTs”. This includes focussing on price discovery, execution, settlement, and custody.

Amazon’s move into cryptocurrency has been anticipated amongst experts for some time. It has always been expected to include some payment token, perhaps an Amazon coin. This is based on previous job postings that have alluded to such developments.

A small town in Texas finds Bitcoin Mining as a profitable opportunity.

Rockdale is a small town in Texas that had a former aluminium smelting facility. The facility stopped operations in 2008. Following that, the electricity went wasted in the grid since the closure of the plant. However, since the miners set up shop, they consume it to verify transactions and maintain the network.

The town has benefits that industrial-scale miners can take advantage of. These include crypto-friendly politicians, large areas of abandoned land, and very cheap electricity prices.

Full Story: Bitcoin Mining brings a new lease of life to a small town in Texas

The government of El Salvador providing a $30 incentive for using the Bitcoin wallet sounded like a good start. However, the Identity Thieves/Hackers are intentionally stealing those incentives from wallets in El Salvador.

Hundreds of Salvadorans have reported on social media about this theft since September. In the majority of the cases, the affected Salvadorans tried to activate their wallets. Unfortunately, this happened after they learned of the identity theft the hackers were doing with the Chivo wallet.

After purchasing, customers receive a prize code via email which they check and claim the prize through the Robinhood app.

The Municipal Administrative Center of Beijing officially announced the launch of an e-CNY enterprise zone. This zone is developed in order to  “explore the digital renminbi financial system.” Moreover, it provides support for experimental digital currency projects.

The Municipal Administrative Center zone becomes the second to test e-CNY in the city. At the Winter Olympics 2022, the Shijingshan district indicated support to test e-CNY transactions with foreign tourists.

E-CNY is expected to launch at the Beijing Winter Olympics in February. Post that, it will become the first major fiat digital currency.

McDonalds enters the NFT industry with an NFT with some surprises.

Fast-food giant McDonald’s revealed that it is entering the NFT game with a brand new McRib NFT. This also includes a surprise element in the draw.

According to its tweet, the company created its NFT called McRib. Virtually anyone can win this prize and all it takes is a single retweet of the announcement tweet. Previously, the company had a venture to give away NFTs in China.

A Metaverse Startup closes $93 million in Series B funding round.

The Sandbox, a Metaverse startup, closed a $93 million Series B funding round. The metaverse is an Ethereum-based platform wherein players “create, own and govern a virtual world.”

A Hong Kong-based gaming firm Animoca Brands own the majority of the startup. In fact, its valuation in October was at $2.2 billion. Also, the company had completed a capital raise of $65 million. Moreover, the company also mentioned the names of investors that include: Liberty City Ventures, Ubisoft Entertainment & Sequoia China. It also included Dragonfly Capital & Com2uS.

Full Story: The Sandbox, a Metaverse Startup raises $93 million in funding round