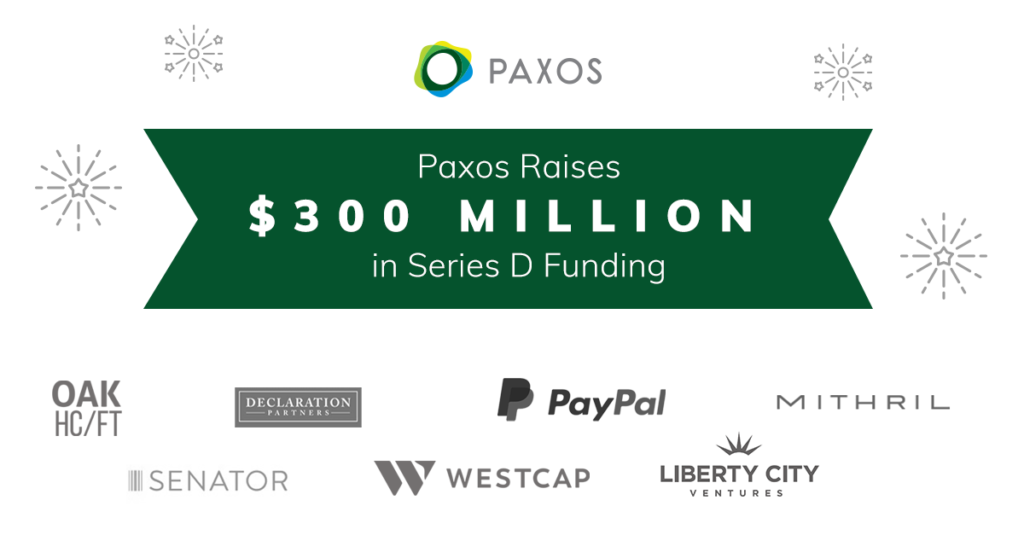 As we’re seeing more companies such as Paypal (and its Venmo app) offering the ability to buy and sell cryptocurrencies, the need for a company that provides the back-end infrastructure has also risen. Paxos, a New York-based firm, started in 2012, is doing exactly that. To continue its growth, Paxos has closed a $300 million Series D funding round.

Paxos’ CEO Chad Cascarilla mentioned in an interview that the amount will be used to expand its employee base and have working capital. He stated that it might be used for acquisitions as well, though there aren’t any plans at the moment. It also aims to get new customers, which are the same size as Paypal.

Along with providing blockchain infrastructure, Paxos also runs a regulatory-compliant exchange dubbed itBit. It also has a stablecoin-as-a-service offering. Not only it runs its own stablecoin in the form of Paxos Standard, it has also partnered with Binance to introduce Binance USD (BUSD) — both of which are among the top 10 stablecoins by market cap. Cascarilla highlighted that the amount that Paxos has in the deposits for stablecoins has grown to $10 billion — 5x the amount since the beginning of this year, and 40x the amount since the beginning of 2020.

Paxos also recently received conditional approval for the de novo Trust Bank charter for digital assets from the OCC (Office of the Comptroller of the Currency). This will allow the company to hold money directly with Federal Reserve. It’s the third crypto firm to receive approval after Anchorage and Protego. That’s not all, it’s also applying for a license for same-day trade settlements in the equity markets. It has already done a pilot test with Credit Suisse.

With a valuation of $2.4 billion, the fundraise was led by VC firm Oak HC/FT. Previous investors like Declaration Partners, Paypal Ventures, Liberty City Ventures, and Mithril Capital also participated in the round. Worth noting that Paxos has raised its Series C round of $142 million in December 2020 only.