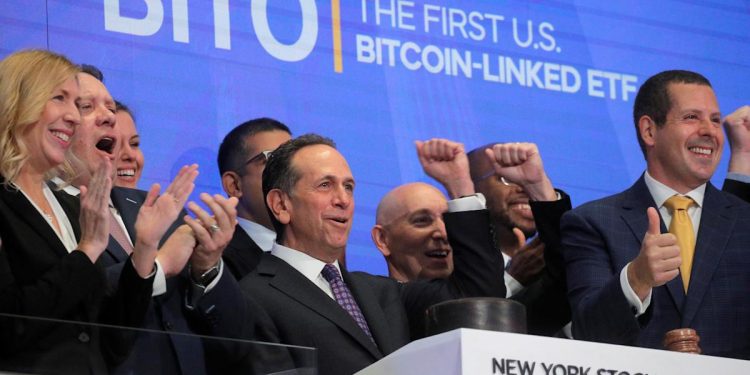 Bitcoin breached the $66,000 mark on Wednesday, a day after its debut on the New York Stock Exchange. Last week, the United States securities and exchange commission (U.S. SEC) gave a green signal to launch exchange-traded funds for Bitcoin based on future contracts.

Its debut on Wall Street is significant for this is the first major development that fosters the unregulated digital asset’s adoption in the mainstream.

At the time of publishing, Bitcoin was trading at $66,873. The ETF is nearing a five per cent rise at the New York Stock Exchange on Wednesday. On its debut on Tuesday, it had risen nearly 4 per cent to close at $64,206 on the NYSE.

As the largest cryptocurrency by market capitalization spiked by over 7% on the day, investors cheered the Proshares Bitcoin Strategy ETF (BITO), which launched on the New York Stock Exchange (NYSE) in the previous session.

BITO’s debut was the second-largest ever for an ETF, reflecting massive interest in the crypto sector. However, incoming buyers — especially first-time crypto owners — should be forewarned: the new Bitcoin ETF(s) won’t trade precisely like the digital market coin that tends to fluctuate wildly.

What other Bitcoin Contenders have to say?

Investors have been clamouring for a fund based on spot prices that would better serve retail investors. However, the SEC chose to approve BITO first because, as futures-based products, they are governed by a 1940s law act that gives investors a higher degree of protection.

Other Bitcoin ETF contenders — including Grayscale, which offers (GBTC) — remain optimistic. That the futures-based ETF will pave the way for a spot product. But near-term, Balchunas remains bearish given that SEC Chair Gary Gensler appears less interested in the spot ETF for Bitcoin because it falls under a 1933 securities provision that grants less investor protection.

“Gary Gensler just isn’t really comfortable with the 1933 act,” said Balchunas. Suggesting the possible timeline for offering for a Bitcoin spot ETF, he added: “If you forced me to pick a date for that, I would probably go with a year to eighteen months.”

At the same time, Ethereum also broke through the 4,000 dollar mark with Shiba Inu, which was the only crypto down among the top 25 currencies. The much-anticipated exchange-traded fund launched on 20 October, carrying Bitcoin from 60K to 66K dollars.

The year has been a rollercoaster ride for Bitcoin. With the crypto hitting its all-time high to fall over 50% in mere months. In July, it even went below the 30K dollar mark but gained more than 125% in two months.