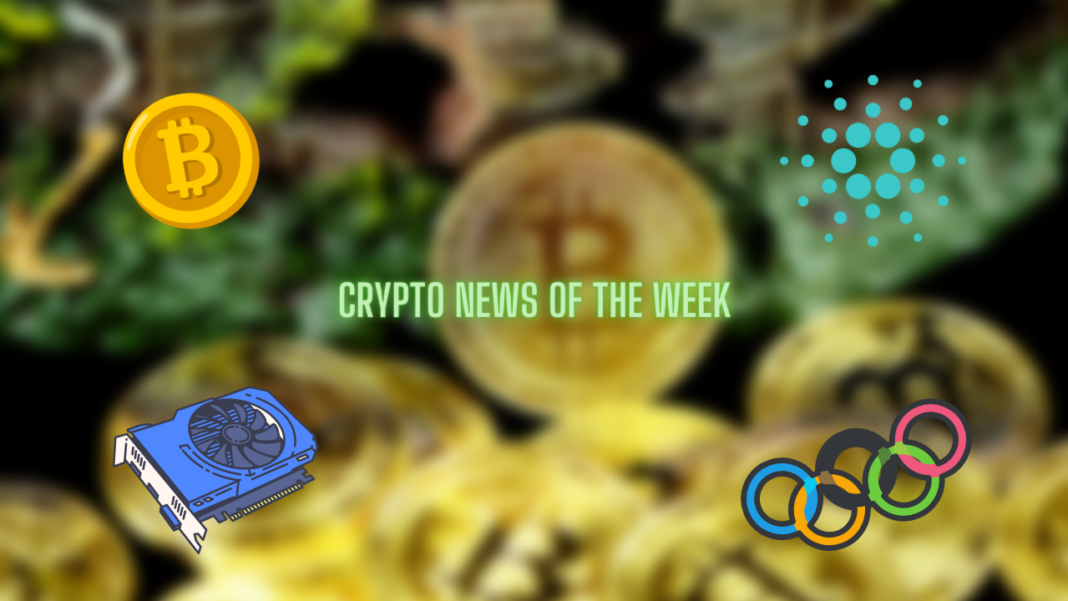 From Ethereum’s co-founder leaving the crypto industry to Graphics card prices dropping after China’s crypto ban, Cardano latest update, there is much to talk about in this week’s roundup. Let’s start.

Anthony Di Iorio, one of the eight founders of Ethereum Blockchain, announced his cutting ties with the cryptocurrency industry. He also said that he’ll sell all his shares in his company, Decentral. Moreover, he is planning to depart from the crypto industry to more philanthropic prospects. However, in an interview with Coindesk, he added that he’ll use blockchain technology to solve ‘large problems’ whenever necessary.

So, developers can now take advantage of smart contracts in the ecosystem. Previously, It was in the ‘blue’ state which supported limited smart contract features to a limited audience in Cardano. On the other hand, Alonzo ‘white’ supports 500 validators, stake pool operators, and developers to test the new features. The new testnet will run for two to four weeks before upgrading to the final testnet, known as Alonzo purple. Thus, it will see a step up in users from every stakeholder group load testing the network.

Polygon launches Polygon Studios to focus on gaming and NFTs

Ethereum-scaling project Polygon has launched its new unit named Polygon Studios. This will help in advancing blockchain gaming as well as NFTs. The company has stated that the new unit will “bridge the gap between Web 2 and Web 3 gaming.” The gaming studio aims to help developers create blockchain-enabled gaming. On the other hand, its NFT studio will help in developing custom NFT models and marketplaces. Around 100,000 gamers and 500 dApps are currently available on the platform, including names like Decentraland, OpenSea, and Skyweaver.

In a viral video clip, A steamroller is crushing hundreds of Bitcoin ASICs on the ground. Originally, the source of the video was thought to be China. But, it turns out, it was the Malaysian Police. Malaysian police in the city of Miri was deposing 1,069 Bitcoin ASICs. The reason for that was a crackdown on electricity theft. The Miri police and Sarawak Energy Berhad carried out this joint operation between February and April. They arrested eight people for allegedly stealing electricity for mining Bitcoin and equipment worth $1.25 million.

In the latest argument with the government, ED has issued a show-cause notice to WazirX for allegedly violating the Foreign Exchange Management Act (FEMA). The transactions in question are worth 2,790.74 crore rupees (~$372 million). ED also had doubts regarding WazirX’s capability to allow users to make cross-border payments without the government’s permission. Many regulatory authorities are highly concerned about this as, without proper documentation, it’s impossible to find the sender’s or receiver’s details.

David Suski is an individual seeking $5 million in damages from Coinbase regarding their allegedly misleading DOGE campaign. In a legal document submitted by the plaintiff, he stated that he was tricked into trading $100 of DOGE for a sweepstakes offer. However, according to him, the document couldn’t communicate that it wasn’t necessary to purchase a $100 DOGE for entering the sweepstakes. The plaintiff also argued that anyone could enter it through the 3×5 inch index card without any charges. His arguments were regarding the advertisement being deceiving and confusing.

Purchase COVID-19 insurance through Digital Yuan and get discounts

Chinese insurance giant Pingan has issued insurance policies using the country’s virtual currency. The insurer’s local subsidiary has developed a COVID-19 insurance plan for medical staff. According to local reports, users who pay their premiums through Digital Yuan can receive discounts. The policy covers 300,000 yuan ($46,342) for death by COVID-19. There’s also a 50,000 yuan ($7,723) cover for COVID-19 diagnosis and 50,000 yuan for accidental death. Moreover, this is the first time the public can buy an insurance cover through virtual currency.

GPU prices have started dropping after China’s crypto mining ban came into effect. A couple of months back, users had to buy almost thrice the MSRP for getting high-end cards like GeForce RTX 3080. Now, According to 3D center, off-the-shelf GPU prices are at a six-month low. However, the effect of these price drops is varied by region. Places like the United States and Indian markets haven’t seen the price drop yet, and it’ll take a while for them to go down. Moreover, it is expected to see many second-hand cards flood the market due to China’s crypto mining ban.

In a Monday letter to the U.S Olympic Committee leadership, three republicans said that Athletes shouldn’t “receive or use digital yuan during Beijing Olympics.” China’s virtual currency is currently the most advanced central bank digital currency (CBDC) project in the world. The Chinese government has been readily pushing in major cities in its country. The Three Republicans raised concerns that China’s communist regime might attempt to exploit e-CNY as a surveillance tool.