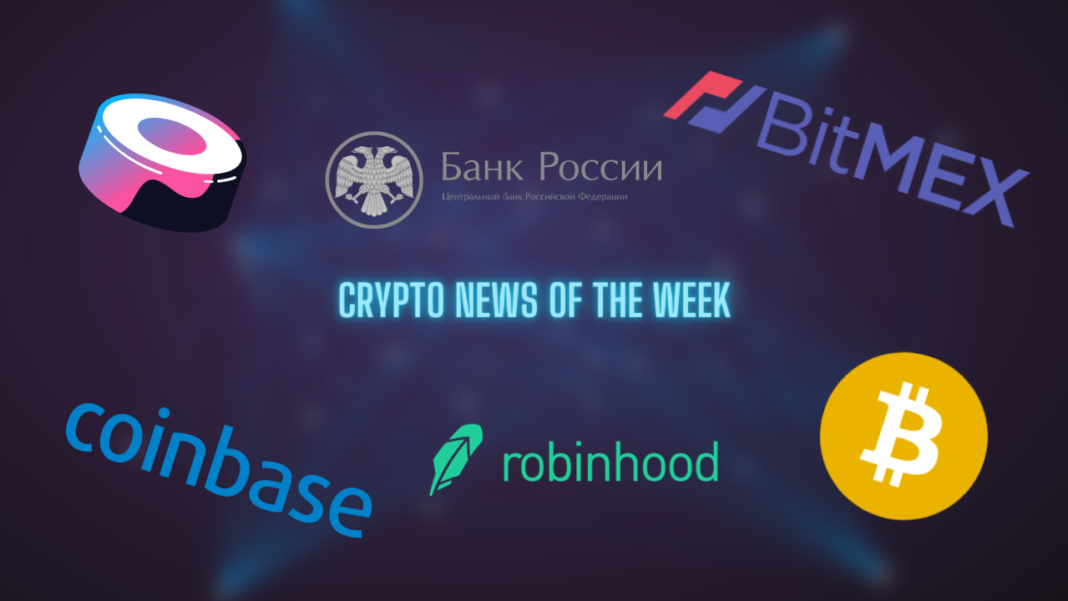 The president of Turkey has some serious reservations about cryptocurrencies. Similarly, the Russian Central Bank has reportedly slowed down transactions to crypto exchanges. Moreover, crypto exchanges like BitMEX dropped Korean language support ahead of the regulatory deadline in the country. Not exactly a ‘merry’ week in the world of crypto. But what else happened? Let’s talk about it in this week’s round-up.

The Central Bank of Russia (CBR) has devised a new method for limiting crypto usage. During an event in Sochi, a CBR official stated that the bank is working with commercial banks to delay payments to crypto exchanges.

Explaining the objective behind the move, he said that this is to limit the so-called ‘emotional’ purchases. Moreover, the move will affect peer-to-peer and over-the-counter trading platforms.

Although cryptocurrencies like Bitcoin, Ethereum, and DOGE are trending in the country, The Central Bank of Russia remains skeptical about investing in crypto. Also, while the Russian crypto community is planning ways to attract investors, lawmakers are keen on the regulation of the industry.

US-based crypto exchange Coinbase has signed a multi-million contract with the Department of Homeland Security for technology development.

Under the agreement, the crypto exchange will deliver ‘application development software as a service for U.S. immigration and customs enforcement (ICE). It has already received $455,000 from the department when the contract took effect last Thursday.

With time, however, Coinbase will receive upwards of a million dollars as the contract can see an extension of three years.

Previously, Coinbase secured a $30,000 contract that provided ‘computer forensics services to the agency. However, the Crypto community is not pleased with these partnerships and has backlashed them.

The community had also criticized Coinbase’s move of acquiring blockchain analytics start-up, Neutrino for its involvement in helping authoritarian regimes spy on journalists.

The telecom provider has registered 7,477 businesses on its blockchain-based communication platform including banks, educational institutions, and private companies.

BSNL DLT will screen every SMS of the business against pre-registered messaging templates hosted on the blockchain. However, if the message doesn’t match, the telecom provider will block the message.

Can ramifications occur in the crypto industry after Chinese real estate developer, Evergrande goes into crisis?

The topmost real estate developer in China, a global Fortune 500 company, Evergrande, is in docks over not payment of dues. It has debts worth $305 billion, which is 2% of China’s GDP.

As per media reports, more than 128 banks and 121 non-banking institutes have lent money to Evergrande. However, this year’s slowdown in China’s overheated housing market resulted in a drop-in sale, making it harder for China Evergrande to pay its suppliers.

Moreover, pressure has been building upon China’s real estate market.

While there’s no direct link between Evergrande and the crypto market. There is the case of widespread risk aversion and FOMO. However, the effect of Chinese property giant Evergrande’s debt crunch seems to have spilt over into cryptocurrencies.

Bitcoin fell below $45,000 in a broad sell-off of cryptocurrencies.

Robinhood is testing crypto wallet features according to their beta version of the iOS App.

According to reports, a hidden image showed a waitlist page for users signing up for a crypto wallet feature. Software developer Steve Moser discovered the code about the incorporation of crypto features in the Robinhood app.

The same developer had found the code in Twitter’s beta about accepting Bitcoin as its ‘Tip Jar’ feature.

Robinhood had previously announced that it would enable withdrawals and deposits of crypto including DOGE. In fact, the company had tweeted about it in February, stating ‘full intention’ of providing the extra functionality.

President of Turkey: Cryptocurrency will not receive premium treatment.

Recently, the President of Turkey, Recep Tayyip, also shared his views on crypto while attending the ‘Meeting with Youth’ program. The event took place in Mersin which is a port city in southern Turkey.

Replying to a student’s question about the state of crypto in the country, Erdoğan said, “On the contrary, we have a separate war, a separate struggle against them.”

He gave a few examples of the mishaps that happened involving crypto in Turkey. For example, Turkish police had investigated a DOGE investment scam that stole from 1,500 investors in August.

VEE Finance loses about $35 million worth of crypto assets under a hacker attack.

The decentralized Finance (Defi) Platform VEE Finance has lost a total of 8804.7 ETH (around $26 million) and 213.93 BTC (around $9 million) under attack on 21 September 2021. As a result, the platform has suspended the contracts to ensure the safety of more users’ assets.

As soon as the announcement was made public, the protocol’s native token, VEE, plummeted drastically from $0.23 to below $0.09.

Vee Finance has even addressed the hacker directly through their official Twitter handle. Moreover, they also explained the cause of the attack.

The leading cause that triggered the attack was that in creating an order for leveraged trading, pool price fluctuation was more than 3%. So, when the oracle refreshed the price, the attacker manipulated the price of the pool.

This resulted in the expected slippage check before the swap did not work.

BitMEX stated that they removed all Korean language from its site and trading platform. Previously, Binance had announced that it is removing Korean won payment options and trading pairs from its website in August.

Bybit had also stated recently that it is stopping Korean language support to its platform. Also, the exchange said that it would end its official Korean community support on social media channels.

However, citizens can still access the platform and trade in the country in the English language.

In April, South Korea’s Financial Services Commission said that crypto exchanges must register with its anti-money laundering firm. The commission gave a deadline date of 24th September to comply with the regulations.

SushiSwap rejects the existence of a billion-dollar bug in the system.

Popular decentralized exchange SushiSwap has rejected that its system has a purported vulnerability.

According to reports, a white-hat hacker claimed to have found this vulnerability. Moreover, he said that this could potentially place more than billion-dollar funds under threat.

Sushiswap has an Emergency Withdraw function allowing liquidity provides to claim their tokens while forfeiting rewards under emergency. However, the hacker claims that this feature will fail if no rewards are present within the Sushiswap pool. Moreover, this forces liquidity providers to wait for the pool to fill in about 10-hours before withdrawing the tokens manually.

Full Story: SushiSwap denies a billion-dollar bug in the system

Bitcoin.org faces another attack, goes offline for a few hours.

Bitcoin.org is one of the oldest websites about the premier crypto. However, the website is regularly under attack by online scammers. The website faced another attack according to its anonymous creator Cobra.

Cobra soon disabled the website. Moreover, he suggested that the hackers found a flaw in the DNS. They then exploited that flaw through which they were able to gain unwanted access to the website. However, Cobra reassured that there is no compromise of the website’s Cloudflare accounts and servers.

This is not the first attack the website has faced. For example, Bitcoin.org previously faced a DDoS attack in July.