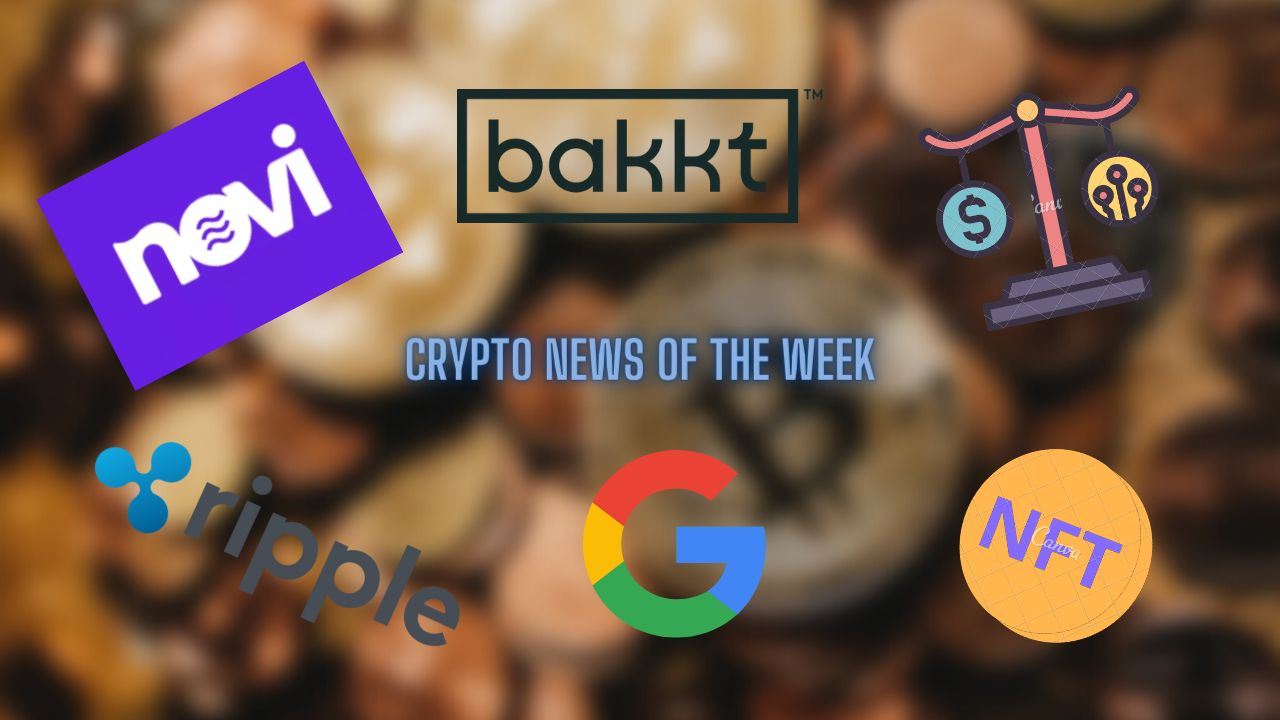 This week for the crypto industry went pretty exciting as Bollywood superstar Salman Khan hops onto the NFT bandwagon. Not only that but Russia’s President Vladimir Putin has aired his views about crypto stating it’s not worthless. On the other hand, Facebook has launched its crypto wallet, ‘Novi’. What more happened the previous week? Let’s talk about it in the week’s crypto roundup.

Recently, technological giant Google has partnered with this digital assets platform, to enter the high-popular digital assets market. Bakkt announced this collaboration on their Twitter account.

Bakkt users who hold debit cards will now convert their crypto balances to make fiat payments via Google Pay. However, it isn’t limited to that.

Bakkt plans to build new analytics and geolocation functionality on its platform using Google Cloud Tools. The mutual relationship ensures that the features will expand loyalty redemption options. All the “while providing Bakkt partners with valuable consumer behavior patterns.”

President of Russia gave his views about cryptocurrency, stating it has potential.

Talking at the Russian Energy Week conference in Moscow, Russian President Vladimir Putin had some interesting points to undertake. Initially, he talked about whether it is viable as a unit of account while trading energy resources. Moving on to that, he talked about its viability as a replacement in traditional currencies. While he stated that it is still an early time reaching a conclusion, it’s a viable discussion looking upon the characteristics of crypto in such use-cases.

Salman Khan enters the world of NFT, will launch its own NFT in december.

Bollywood superstar Salman Khan revealed this week that he will launch his own NFT this year in December. After Amitabh Bachchan, Salman Khan is the latest addition to the Bollywood NFT club.

Salman Khan became one of the first big names from Bollywood to commit to entering the Indian NFT space with BollyCoin, a platform started by producer-director Atul Agnihotri (Salman Khan’s brother-in-law).

It seems Bollywood celebrities are also hopping onto the international trend of non-fungible tokens (NFT) that have revolutionised the digital assets market. The 55-year-old announced his partnership with BollyCoin on Twitter, as he shared a glimpse of the NFTs.

BollyCoin promises the fans the possibility of allowing fans to invest in the merchandise from their favorite stars. The website will auction the digital collectibles from the Bollywood industry on its platform.

Full Story: Salman Khan Hops on To NFT Bandwagon, to Reveal in December

Ripple will assist in the development of Digital Pound in the United Kingdom.

Popular blockchain Ripple has joined the development of the Digital Pound CBDC. The company has partnered up with the Digital Pound Foundation, a non-profit organisation that seeks to facilitate the rollout of Central Bank Digital Currency(CBDC) in the United Kingdom.

Susan Friedman, Head of Policy will represent Ripple’s counterpart on the board as a foundation member.

Ripple believes the UK is at the forefront of encouraging responsible innovation and growth in the crypto-asset space. In fact, the development of a digital Pound is the logical outgrowth of that work.

The partnership comes barely a month after Ripple inked a collaboration with Bhutan’s central bank, the Royal Monetary Authority (RMA). The deal aims to conduct a pilot project to facilitate cross-border and wholesale payment through a CBDC solution.

G7 countries, namely – the US, UK, Japan, Italy, Germany, France, and Canada have issued guidelines for the development and implementation of CBDCs. All of the abovementioned countries unanimously agree that Central Bank Digital Currencies (CBDCs) have several benefits to offer.

However, they also added that the implementation of CBDCs should not hamper central banks’ ability to maintain monetary and financial stability. On the subject of this statement, many economic analysts find it vague.

Global central banks have stepped up efforts to develop their digital currencies to modernise financial systems and speed up domestic and international payments.

The issuance of CBDC would easily complement cash – acting like a liquid, safe and secure settlement asset and a legal tender. Moreover, it will also act as an anchor for the payments system.

South Korea has reportedly postponed its crypto tax bill to 2022.

In his statement, South Korean Finance Minister and Deputy Prime Minister Hong Nam-ki said that the country’s plans of tax gains on cryptocurrency trading will start from 2022.

The South Korea crypto tax will likely take effect from 2022 due to some significant factors. The taxed class would not include NFTs.

However, The majority Democratic party in the National Assembly proposed an amendment to the tax bill to have it postponed till 2023. Democratic lawmaker Kim Byung-ook also added in an open session on September 15 that the capital gains tax on cryptocurrency should be rolled out alongside a similar tax on stocks in 2023 rather than 2022.

A group of local companies have urged New York Governor to ban crypto mining in the state.

A group of local companies has urged Kathy Hochul, the Governor of New York state to deny business permits to bitcoin miners. The letter also requests the governor to address the “proof-of-work” digital currency mining in the state.

After China banished most of its crypto miners out of the country, many started seeking new homes. Some found themselves in New York to conduct their business. But only to meet with utter displeasure of local businesses.

While states like Florida are friendly to the crypto industry, New York, on the other hand, falls under the not-so-friendly file. The letter was signed by multiple organisations assessment called for an environmental assessment of crypto mining in the state.

Central Bank of France has executed a series of bond transactions leveraging blockchain using its own Central Bank Digital Currency(CBDC) as part of a 10-month pilot.

The Banque de France and a consortium of the main players in the French money markets executed the transactions. This is according to a formula developed by the American company IBM.

The full scope of the project covered a large range of core securities operations, including securities issuance, primary market, and secondary market trades. Moreover, it also includes some liquidity optimisation mechanisms like repo and interest payments.

Facebook launches its crypto wallet ‘Novi’, amidst its rebranding.

Social Media Giant Facebook has launched a long-awaited pilot of its digital currency wallet Novi in the US. Moreover, it has chosen to use the Ethereum based Paxos Dollar stablecoin. This is since its own crypto Diem didn’t pass the regulator’s test.

Only a few people in the United States and Guatemala can use the Novi Wallet in its pilot release. Moreover, its main focus at the current time is on the remittances market between the two nations. In fact, this is a market base in which access to financial services is limited.

For example, 56% of this demographic has no access to banking and financial services.

Users can make peer-to-peer transactions on the platform at no cost in the future. A peculiar feature that will set the wallet apart from its rivals. Moreover, Novi is interoperable with other digital wallets in the future.

The High Court of Pakistan has ordered the government to regulate crypto within three months.

The High Court of Sindh (SHC) also asked for a report from the government on deliberations surrounding crypto regulations within the same period. In fact, the highest judicial body in Pakistan’s Sindh Province has asked the government to come up with modalities for cryptocurrency regulation.

Moreover, the SHC also requested that a report on the steps taken to regulate cryptocurrencies be submitted in the same period. According to reports, the SHC instructed while hearing a petition brought before the court challenging the legality of the country’s 2018 crypto ban.

High Court has also urged regulators to work in tandem with the central bank to work with government agencies such as the Ministries of Information Technology and Law to develop crypto regulations within three months.

The SHC’s instruction on Wednesday puts Sindh as the latest province to demand some form of recognition for cryptocurrencies in Pakistan. Meanwhile, like many other central banks worldwide, the State Bank of Pakistan (SBP) is also studying central bank digital currencies.