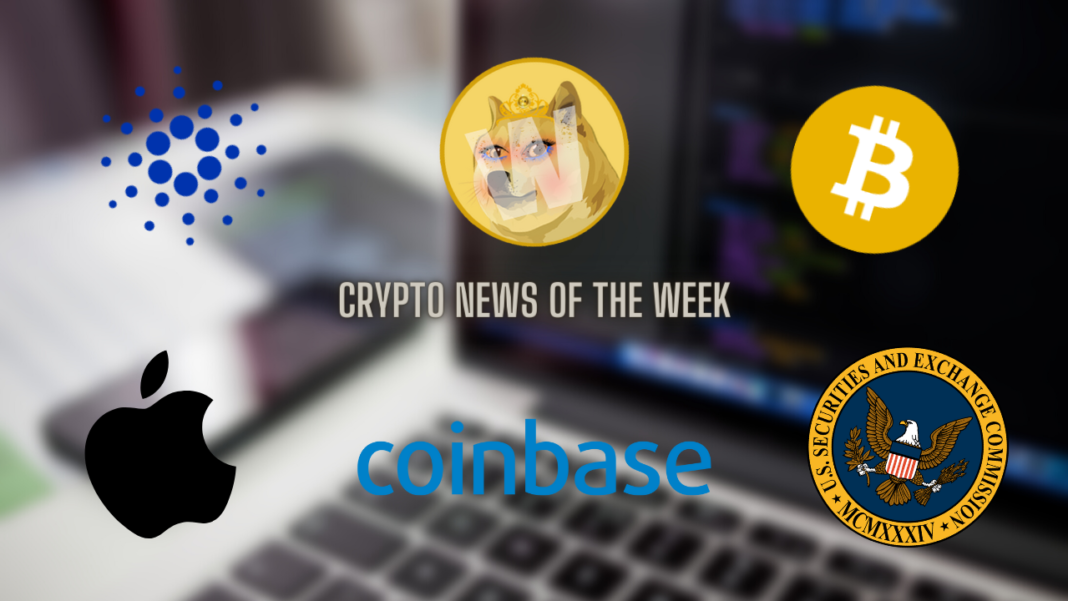 Popular tech company Apple will loosen its app store restrictions paving the way for NFTs on iOS apps. On the other hand, Taiwan police arrested 14 people in a crypto scam. What more happened this week? Let’s talk about this in this week’s crypto round-up.

It’s no secret that Apple has a pretty restrictive ecosystem. However, being a premium ecosystem, the company has a tremendous user base and superb app support that can rival the mighty Android. However, the $2 trillion company faces the heat from various developers due to its closed-source nature.

Also, with two lawsuits against Apple for breaking antitrust laws, it looks like the company is making amends for that. In fact, Apple has reduced its App Store restrictions on small developers. Other than allowing developers to use another payment retails, the move paves the way for NFT platforms packaged in iOS apps.

Previously, it wasn’t possible due to its restrictive nature. Now, many believe that the Apple settlement is a “big step” toward the tech giant becoming an ecosystem that can “fully support NFTs.”

Full Story: Will the latest move of Apple help NFTs?

Bitfinex, one of the oldest crypto exchanges, has launched derivatives contracts.

Bitfinex has had its operations for over 9 years. Now, the popular crypto exchange has announced the launch of perpetual derivates. Through this, users can have leveraged up to 100x for their contracts on Filecoin and Avalanche.

A Perpetual derivative is an agreement to non-optionally buy/sell an asset in the future. Users can trade with the new derivates on the company’s Fintech derivates platform, iFinex. Bitfinex has already launched a derivative on DOGE in May this year. Moreover, the company has launched similar products for Bitcoin, Ethereum, Polkadot, and Litecoin.

DOGE, the popular memecoin has got another clone named Wifedoge.

Many believed that popular meme coin DOGE would be as crazy as it goes. However, it looks like there is a ‘clone’ of DOGE, Wifedoge that is even crazier than the former.

The meme coin had catapulted over 3,000% in terms of market cap. It achieved this feat in a week! Wifedoge has similar characteristics to all other meme coins. Its description mentions itself as a good wife that helps doge make money.

Moreover, the creators of Wifedoge have stated that the value of each of their tokens will become equivalent to one DOGE. That is a pretty ambitious claim, given DOGE has increased its value by more than 4,600% this year.

Also, DOGE has the support of a lot of powerful and influential people.

The Investigation Bureau of Taiwan arrested 14 people for their role in a crypto scam.

The Crime Investigation Bureau (CIB) of Taiwan explained that the crypto scam took out more than $5 million worth of crypto assets. Also, the scam defrauded more than 100 people over the past year. Now, the suspects will face charges of fraud & money laundering. The investigator-in-charge talked about the mastermind, a businessman with the last name Chen who devised the whole plan.

The scam focused on Ethereum, Tether, and Tronix. Chen had a company named Azure Crypto Corporation. Through the company, he aired crypto promotions on social media and lured customers with interactions to perceived attractive women. Moreover, the company claimed itself as financial advisors, specializing in crypto mining.

7th September is an important day for El Salvador as it has become the first country to implement Bitcoin adoption. A move that crypto proponents state will lower commission costs & crypto critics states that will fuel money laundering.

The country’s president has aggressively pushed for cryptocurrency adoption. According to him, El Salvadoreans will save about $400 million on commissions for remittances. He also expects the move to offer financial services to the unbanked. However, many accused him of eroding democracy.

And while he’s popular with the public, the significant population knows the volatility of the premier cryptocurrency.

Chairman of Financial Conduct Authority of U.K. singled out celebrity Kim Kardashian in a new warning about crypto-token scams. The chairman discussed it in a speech stating how online platforms can offer bad advice to help investors avoid bad decisions.

He explained that in detail giving the example of Kim promoting a specific crypto token by ‘joining Ethereum Max Community.’ Due to her massive follower base, it could become the biggest financial promotion in history.

However, it could easily become a massive rug-pull resulting in millions of people losing money.

In the end, he stated that the legislators have to consider these issues and create appropriate regulations to prevent such potential mishaps from happening.

Former RBI governor thinks cryptocurrencies should be an asset class and be subjected to taxation in India.

Amidst all the uncertainty regarding cryptocurrencies in India, the former central bank governor has given his views about it. Speaking at the inaugural Hodl virtual conference, Rama Subramaniam Gandhi said cryptocurrencies can become an asset class.

According to him, cryptocurrencies are more suited to be an asset class rather than a mode of payment. If cryptocurrencies become an asset, taxes can be levied on them. Moreover, it also opens the scope of creating a regulatory framework where Indians can invest and hold digital assets.

As of now, Indians can hold and invest in digital assets. But the added assurance of a framework paves a way for the flourishment of the crypto community. Also, the government can generate extra revenue through the taxation of cryptocurrencies. After all, the crypto economy is one of the most booming in the world.

In conclusion, the former deputy governor said that the government should proceed with cryptocurrencies open-mindedly.

The United States Securities & Exchange Commission (SEC) has threatened to sue Coinbase on its upcoming crypto yield program. According to SEC, the yield program is a security which is why the commission has to verify it first.

Coinbase CEO Brian Armstrong had tweeted a series of tweets where he talked about his interaction with the commission. Coinbase crypto yield program intends to offer 4% annual yield returns on deposits of USDC stablecoin.

According to him, SEC responded that the lending program is security without any explanation. Moreover, if the service arrives in the market, the commission will sue the exchange.

Brian also mentioned briefly that there are other crypto firms like BlockFi and Celsius offering similar lending services to their customers. In fact, BlockFi is facing investigations in a number of states for its high-interest products.

Ukraine has passed the bill regarding legalization & regulation of cryptocurrencies.

After El Salvador’s decision to make Bitcoin legal tender, Ukraine has taken the first step in the legalization of cryptocurrencies.

On 8th September, The Ukrainian Parliament adopted the draft law “On Virtual Assets” in which the parliament legally recognizes cryptocurrencies. The legislation is based on existing standards developed with intergovernmental policy-making organization Financial Action Task Force Money Laundering (FATF).

Ukraine’s Ministry of Digital Transformation will look at its implementation. It will also guide the industry’s growth in adherence to the “international standards.”

Previously, the Ukrainian President had signed a law enabling the central bank to issue a CBDC.

Cardano’s developer has finally given a release date for the network’s smart contract upgrade.

After months of testing in the ‘Alonzo’ testnet, the developer of Cardano, IOHK has announced the release date for the next upgrade. The majorly awaited smart contracts will arrive on the Cardano mainnet on 12th September.

Now, developers and investors can utilize the massive array of use-cases of smart contracts.

The developer shared this news through Twitter where they mentioned that they had successfully submitted an upgrade proposal to the Cardano mainnet. Following that, it will trigger the hard fork combinator (HFC) event.

Now, the HFC technology will enable the deployment of smart contracts capability with the core Plutus. This will come with all compatibility upgrades across the entire software stack.