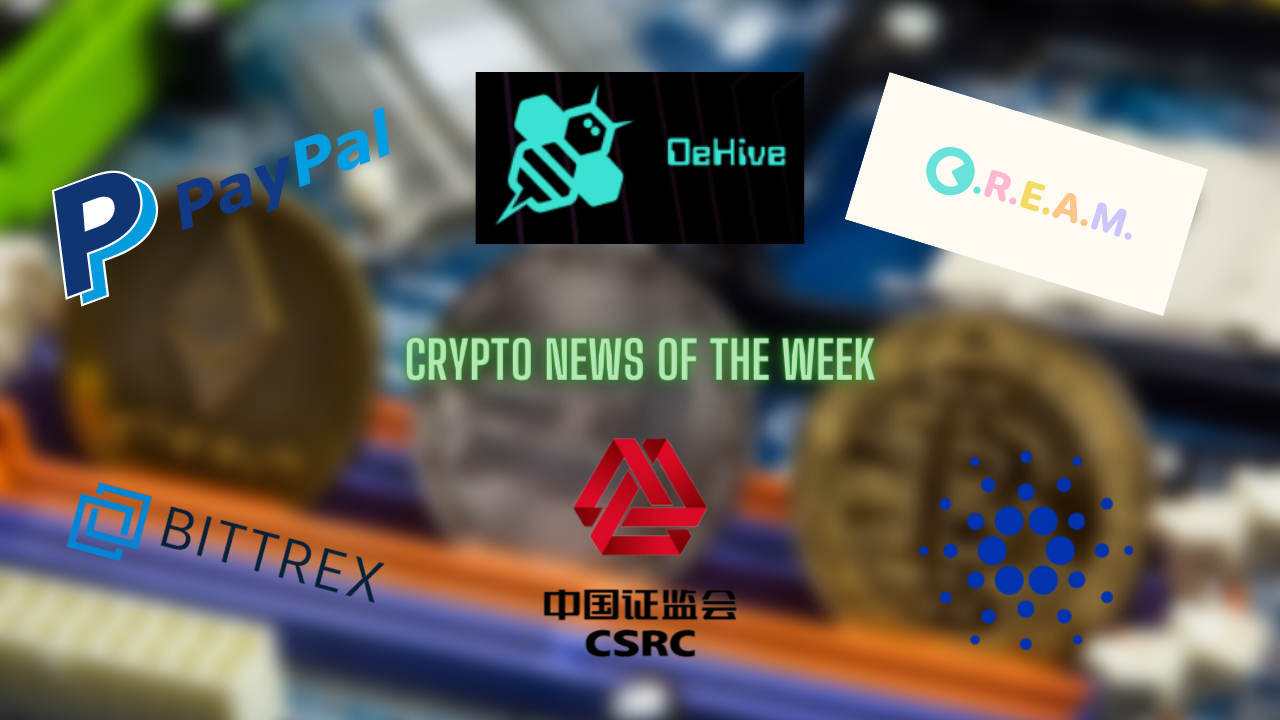 Residents in El Salvador protested against the adoption of Bitcoin just weeks after it becomes legalized. On the other hand, Payments giant PayPal is planning to introduce stock trading on its platform soon. What more happened this week? Let’s talk about this in this week’s crypto round-up.

Residents in El Salvador protested against legalization of Bitcoin in the country.

Residents of El Salvador protested against the adoption of Bitcoin as an official currency last week. The move is months after the lawmakers voted to legalize it as a legal tender. After 7th September, Bitcoin will become a legal tender with a status equivalent to the U.S dollar.

However, many international financial institutions like the IMF have criticized the move. To make matters worse, hundreds of demonstrators – including workers, veterans, and pensioners – marched through the capital San Salvador, voicing their concerns about the use of cryptocurrency. They held up signs saying “Bukele we don’t want bitcoin” & “No to corrupt money laundering”. While the country’s president has stated that Bitcoin adoption will facilitate remittance payments from Salvadorans living abroad, people are concerned that over-reliance on crypto might lead to the payment of pensions and welfare in crypto instead of the standard U.S Dollar.

Hackers wipe about $19 million worth of crypto assets from Cream Finance platform.

According to a data analytics company, hackers managed to steal $18.8 million in the latest flash loan exploit. The firm also stated that the hacker managed to gain such a massive number of tokens due to a reentrancy bug in their token.

After the attack, Cream Finance has stopped the exploit by pausing supply and borrow contracts on the particular token. Following the attack, Amp token and Cream Finance’s native token, CREAM, dropped in price.

Bittrex CEO believes Dubai can benefit from expansion in the crypto space.

Bittrex Global’s CEO, Stephen Stonberg recently stated that Dubai can benefit from the growing crypto market in the Middle East. He said this during an interview.

Moreover, Dubai has taken several steps to increase the use of blockchain in the city. Many expect Middle Eastern sovereign wealth funds to do blockchain allocations. On the other hand, Dubai Airport Free Zone Authority signed agreements with the Securities and Commodities Authority regarding the regulation of crypto assets.

Also, the city’s DMCC free zone opened a blockchain-based exchange for sugar trading last year. In fact, Nasdaq Dubai Exchange-listed Bitcoin Fund in June, making it one of its kind to trade in the region. Stonberg stated that Dubai is going very well in terms of embracing cryptocurrencies. He also added that his platform will expand its presence and clients in the region.

Full Story: Dubai can benefit from expansion in the crypto space: Bittrex CEO

It’s no secret that Jack Dorsey, CEO of Twitter and Square, is a huge Bitcoin proponent. He totally believes in the decentralized future and has been making moves with both his companies towards enabling that.

Now, the Square team is working on developing a decentralized exchange, one that’ll be powered by Bitcoin. While the details about the yet-to-be-named Decentralized exchange is negligible, the main aim for the platform is to offer easier on- and off-ramps to Bitcoin.

However, Mike Brock shared some details regarding this exchange. He said that the platform will be developed using an open-source and open protocol. He also added regarding a non-custodial wallet that they’re working on.

Full Story: Square is working on a Bitcoin-powered decentralized exchange

China will Digitize its Financial Markets with Blockchain technology.

China has already stated blockchain as part of the 14th “Five-Year Plan” for the nation. The ruling government is stressing the blockchain along with artificial intelligence and big data to shape the key focus of the economy in the next five years. While the country is readily in favour of blockchain technology, they’ve taken a hard stance on cryptocurrencies, applying blockchain technology in the monetary field. This is also known as the “blockchain, not bitcoin” policy.

DeHive platform launches its first iteration of the crypto cluster.

DeHive is a multi-chain asset management protocol, through which users can manage all their crypto assets under a single protocol. The platform has developed and launched the first crypto cluster: DeHive platform V1.

The platform had conducted a closed beta for the first iteration of its platform. After amending changes from users’ feedback, the DeHive team released the platform’s first version to the general public. It features all the essential measures required for acquiring DeHive clusters, staking, yield farming, and liquidity mining.

PayPal will incorporate the option of stock trading on its app soon.

Payments giant PayPal will introduce stock trading into their mobile app soon. Through this, users can trade individual stocks on its platform.

PayPal is looking to partner with an existing broker-dealer for offering trading services. Moreover, PayPal’s ambitions are pretty high as stock brokerages are a highly competitive market. In fact, the online brokerage market is flourishing tremendously. Also, retail investors entering the markets via online platforms skyrocketed during the pandemic.

Ethereum and Cardano reach to their new record-highs with strong bull runs.

The Crypto market is on a roll these days as the global crypto market cap jumped to $2.22 trillion. Moreover, altcoins like Ethereum and Cardano are posting double-digit gains.

The world’s second most popular crypto Ethereum (ETH) is growing substantially since the last week of July. With a week foot in the last week of July, Ethereum towered above the $3,000 mark in a relatively short time. Following that, Ethereum consolidated at around $3,200 at the end of August. However, after that, in a matter of 3-4 days, Ethereum jumped to over $3,700!! ETH’s graph suggests a sustained bull run.

Also, looking at Ethereum’s dominant competitor, Cardano (ADA). The altcoin also had a pretty similar graph to Ethereum with a low figure at the last week of July. With gradual growth till 8th August at around $1.477, ADA jumped to $2.2 at the end of that week, with a staggering 31% growth!! In fact, ADA was trading over $3 just 2 weeks after that!

It looks like Twitter is also proceeding with incorporating cryptocurrencies with its new feature “Tip Jar”. Through ‘Tip Jar’, users can send money to content creators as a means of support. While the platform only accepted fiat currencies, Twitter is introducing Bitcoin as a payment method to Tip Jar.

An app developer and researcher revealed this soon-to-launch feature. He shared a screenshot of how content creators will receive Bitcoin tips. Twitter will use Strike’s services, generating Bitcoin invoices through the Lightning Network through which they can provide faster payments with lower than usual fees.

Soon after the screenshot, Twitter’s product leader Kayvon Beykpour validated his leak, stating that the team is indeed working on incorporating Bitcoin transactions.

Asset manager Franklin Templeton is planning to incorporate Bitcoin and Ethereum trades into their system. As a matter of fact, the company has recently listed two job postings to tap into the ever-so-growing crypto economy.

According to those job postings, the company is looking for a trader and a researcher. They will join the company’s digital assets management division.

The $1.5 trillion firm looks very interested in cryptos lately as they had backed a Galaxy Digital fund. This fund chases venture opportunities in the crypto economy. However, Franklin Templeton planned crypto hires are very much direct.

The roles will have to execute crypto strategies and build relationships with blockchain developer communities. Moreover, they’ll have to create new crypto products for the mutual fund issuer and money manager.

Will the latest move of Apple ..